Materials from a 120-year-old church in Stevens Point will be salvaged and reused in the redevelopment of the Stevens Point Opera House. 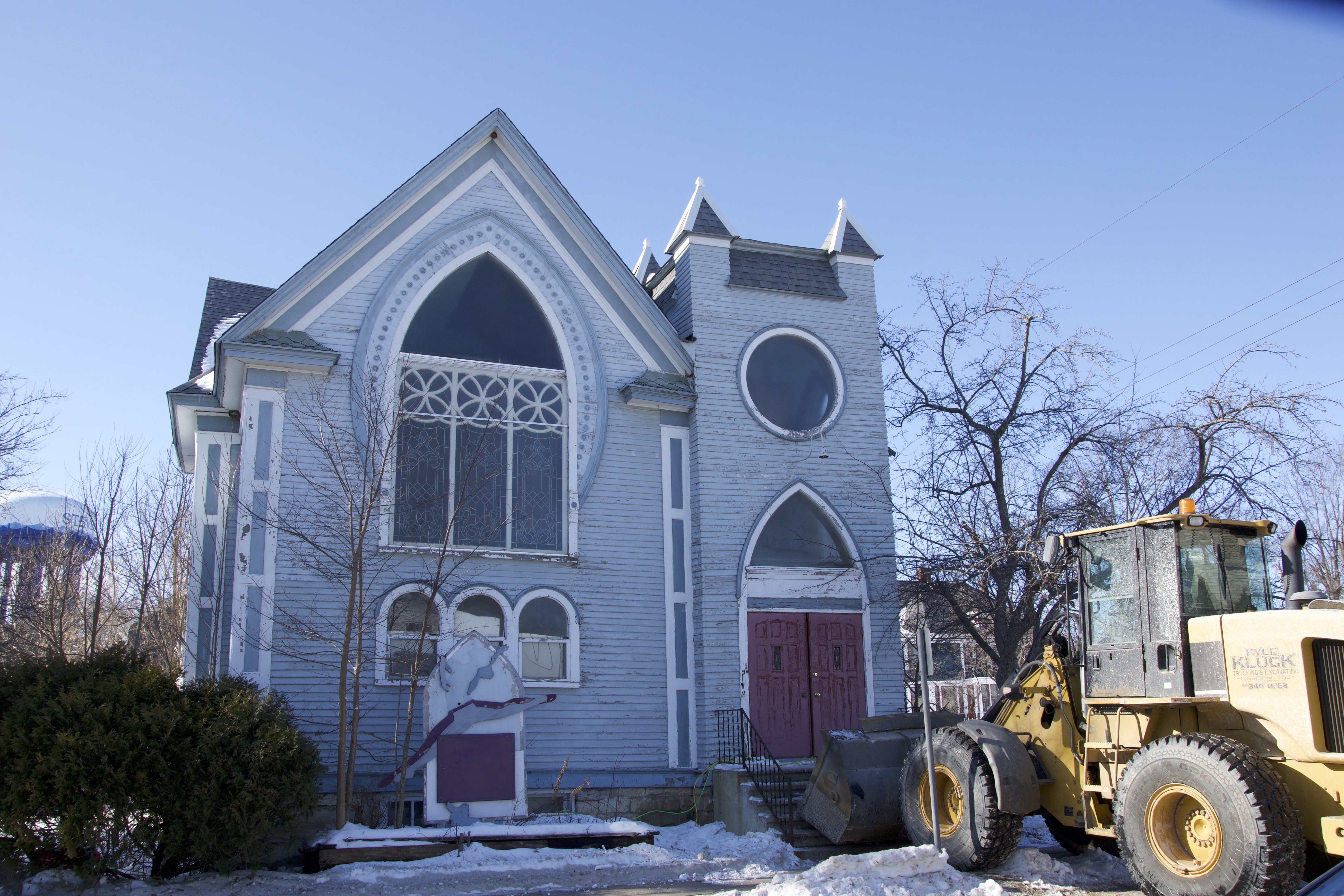 Materials from a 120-year-old church in Stevens Point will be salvaged and reused in the redevelopment of the Stevens Point Opera House. The church, located at the corner of Strongs Avenue and Brawley Street, falls within the historic district of Stevens Point, an area where most of the city’s early upbuilding took place. The Opera House is also located within the historic district, only a few blocks from the church. Both buildings were constructed in the late 1890's, within only a few years of each other. While the church is scheduled for demolition before the end of February, many of the original finishes that decorated the nave remained in excellent condition, so representatives of The Opera House LLC decided to reach out in an effort to salvage some of the materials.

Wildcard Worx, the general contractor for The Opera House redevelopment project, successfully deconstructed and conserved the original pressed metal ceiling ornamentation, the maple flooring throughout the nave, many of the doors and associated wood trim and the original brass chandelier that once hung in the center of the nave. American Relics of Wausau took responsibility for removing the large stained glass windows original to the church and will work to find a new home for them. The Opera House, LLC and American Relics extend their thanks to Kyle Kluck Trucking and Excavating for providing access to the building and assistance with clearing and disposing of the debris and abandoned items that had cluttered the nave.

The Opera House is proud to honor the rich history of Stevens Point's past by preserving reusable materials from this church for the next generation and giving them a new home and a new life as a part of The Opera House. Progress updates and photographs of the Opera House redevelopment are shared on the Opera House Facebook and Instagram pages. 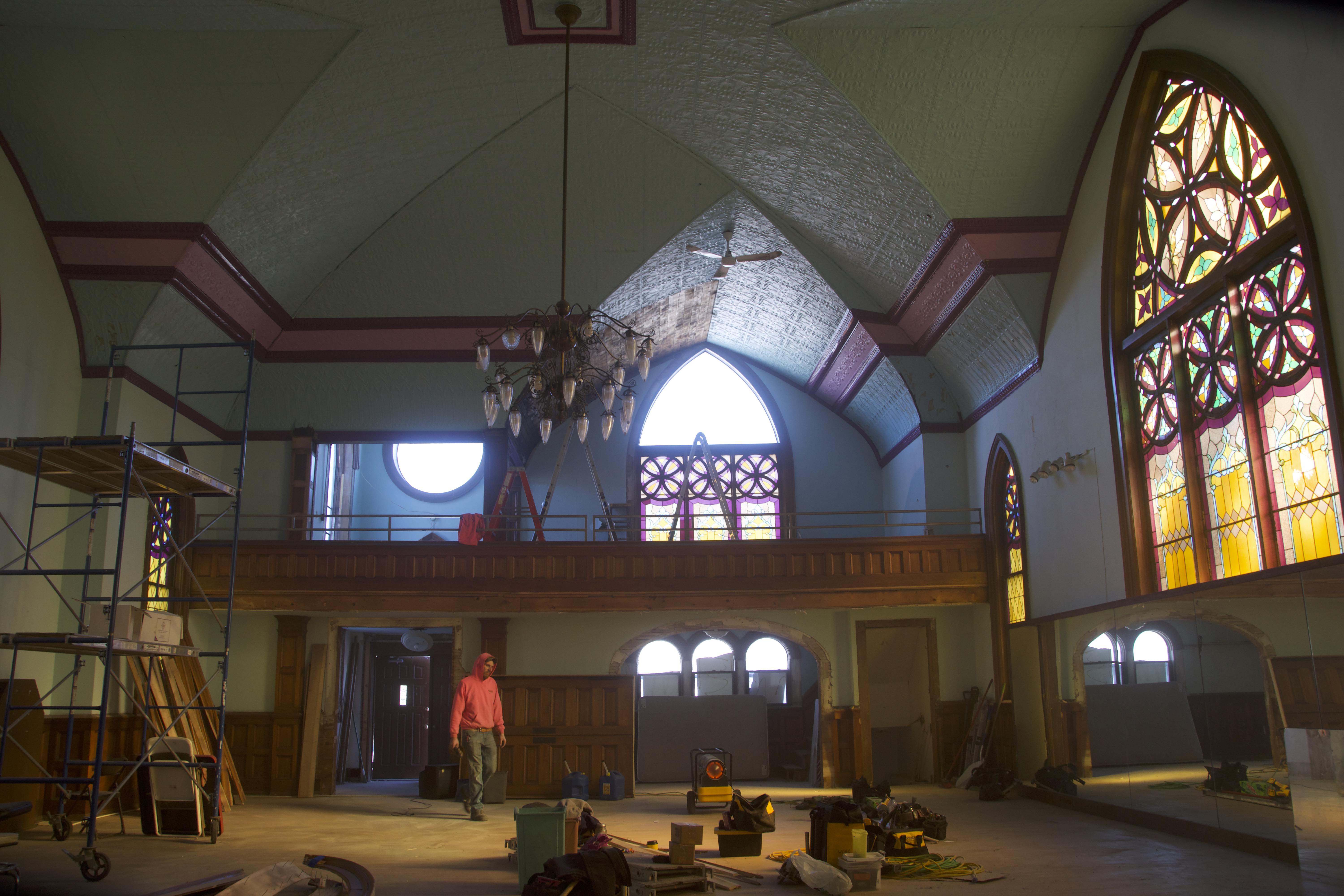 ﻿About the Historic Trinity Lutheran Church

Designed by architect J. H. Jeffers & Company, the small Gothic Revival style church located at 1700 Strongs Avenue in Stevens Point was originally constructed for the Norwegian Trinity Lutheran Church.(3) Construction on the building began in 1899 and was completed in 1900. It was occupied as a church until 1972, when it was sold to a private owner and converted into a partial residential property. In 1988, it was sold again and converted into a dance studio.(2) The property was utilized as a dance studio for almost 25 years until 2013, when the dance school which occupied the space at the time chose to move their business to another location. After the relocation of the dance school the building was left unoccupied.

According to public records, Portage County seized the property in 2020 as a result of 7 years of unpaid property taxes.(1) The City of Stevens Point Redevelopment Authority soon acquired the property and issued a Request for Proposals to redevelop the building. Several parties expressed interest in the property but ultimately did not submit a proposal for redevelopment because of the financial cost. Records indicate that the foundation was in need of repair and the basement level was affected by flood damage. These issues, along with the age of the building, and general deterioration due to neglect are all likely all factors which contributed to the substantial cost of rehabilitating the building.

Receiving no desirable bids for redevelopment, The City of Stevens Point Redevelopment Authority decided to pursue demolition of the building and published an Advertisement for Bids for Commercial Property Demolition on December 17, 2021. The contract for demolition was awarded to a locally owned excavation company, Kyle Kluck Trucking and Excavating.

Kyle Kluck Trucking and Excavating had also completed work on The Opera House redevelopment project and through this existing relationship the two companies were able to coordinate a salvage effort for some of the church’s interior finishes.

The building exterior features decorative horseshoe arch moldings over pointed arch stained glass windows. Sanborn Fire Insurance maps of the early 1900s indicate that the church once boasted a steeple of approximately seventy feet in height, but the spire and upper portion of the original steeple has since been lost.(1)

The Gothic Revival style in the United States was promoted as an appropriate design for rural settings, with its complex and irregular shapes and forms fitting well into the natural landscape.(5) Examples of Gothic Revival style architecture in the United States are most commonly seen in churches, like the historic Trinity Lutheran Church of Stevens Point. The most commonly identifiable feature of the Gothic Revival style is the pointed arch, used for windows, doors, and decorative elements like porches, dormers, or roof gables. Other high style elements such as castle-like towers with a crenelated parapet or a high spire and tracery windows were also common.(5) Such features are easily identified in photos of the historic Trinity Lutheran Church of Stevens Point.

The historic Trinity Lutheran Church of Stevens Point was a perfect example of traditional American gothic revival architecture. Its interior featured a rib vaulted, pointed arch ceiling clad with pressed steel ceiling tiles, furnished and installed by Gross & Jacobs.(1) The traditional rib vaulted ceiling would lend to the dramatic effect of the space when a person entered the nave, a roughly 1500 square foot space of blond maple flooring. The church also boasted many large stained glass windows, standard in Gothic cathedrals, which tinted the natural light shining into the nave. The combination of high ceilings and large windows gave the space a sense of bright openness.

You can see more images of the historic Trinity Lutheran Church of Stevens Point on the slideshow at the top of the page.